I considered writing (again!) about the fond spot I have in my heart for all things New Year’s… instead, I thought I’d repost what I wrote last year about our family’s New Year’s Eve traditions. If you’ve joined us in 2010 and haven’t seen this awesome picture from 1992, it’s worth it for that alone. 🙂

And if you share our love for family traditions, you have a few days to whip up a “Best of…” book as well (there’s an explanation and tutorial at the end of this post). 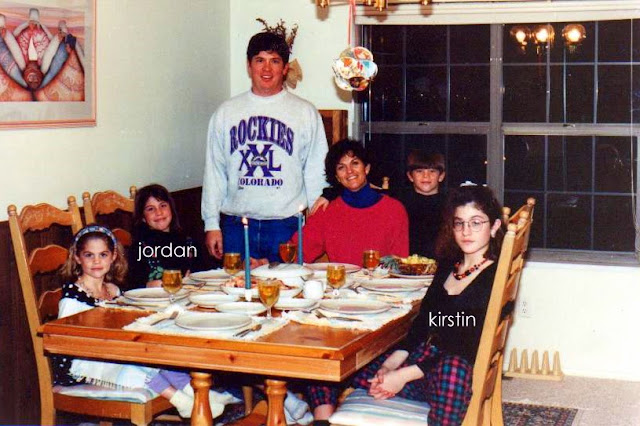 The only picture of this glorious tradition that I could get ahold of… circa 1992.  Awesome, right?
Notice the candlelight, the beloved sparkling cider and the fact that I seem to be wearing a belt over my pajama pants… nice touch.

In the mid 1980’s, on New Year’s Eve in our dining room in New Mexico, my parents started one of my very favorite traditions of all time.  And we have lots of family traditions, so that’s saying something.

Every New Year’s Eve, my mom would prepare a special dinner (usually seafood!) complete with our favorite. drink. ever. (sparkling apple cider) and we’d eat by candlelight (very fancy). Around the time that we were starting on dessert, mom and dad would turn on a cassette voice recorder (I know some of you are younger than me, but you know what I mean by this, right?) and we’d spend the next half hour or so talking about the past year.  We’d talk about our family vacations, the things we were interested in, whether we gained a family member or moved or got a new pet, you know, regular ‘what happened this year’ stuff.

My favorite parts of those tapes now, though, are when my parents would ask us things like what we’d like to be when we grow up, or where we’d like to live someday. As the ever-responsible oldest child, I always had super boring answers (“astronaut” or “lawyer” or “New York City”)… However, my siblings, having left all the trappings of responsibility and ‘stuffy, boring answers’ to me, were freed up to answer at will.  And, oh, the things they rattled off.  One year, Jordan (yep, the very one who co-authors this blog with me) shared of her aspirations to be a Cheetah Farmer.  Well, after first listing the whole slew of other animal farms she would have as she worked up to cheetahs (“First I’d be an ant farmer, and then I’d be a platypus farmer, and then I’d be a crocodile farmer, you know, just small crocodiles… and THEN I’d be a cheetah farmer”).  And another year, our brother spent the better part of the conversation trying to pinpoint where exactly he’d like to live as a grown up.  Never mind the shifting subject matter at the rest of the table, he just rambled and rambled about future home locations.  His final answer?  “Paradise.  No… Heaven.  Yep, that’s where I want to live when I grow up- in Heaven.” Inspired.

Anyhow, those tapes (now made into cd’s) fit into the category of things I’d grab if our house were burning down. 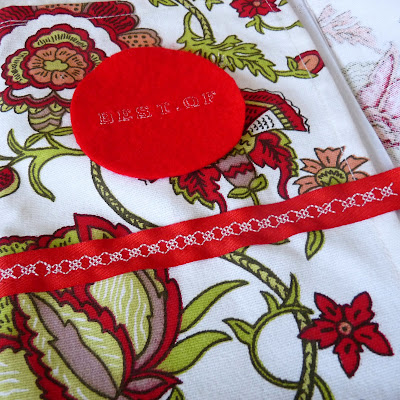 In the grand memory of those New Year’s Eve dinners, and with hopes of having something similar to pass on to our kids sometime, Adam and I started a new tradition this year- the “Best of…” Book.  This year, we wrote down our best memories of 2010… and next year we’ll write down the Best of 2011.  Of course, when Burke is old enough to contribute, we will add his thoughts on the previous year to the book as well. And keeping our dear sweet aspiring cheetah-farmer and heaven-dweller in mind, we will be sure to ask him (and then record) his ideas about his future vocations, places of residence, etc.  Good stuff, y’all, the kind of stuff that needs to be preserved for posterity. 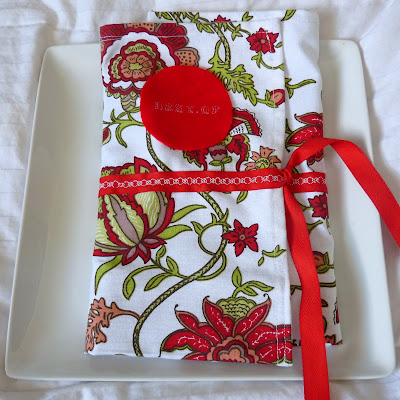 If you’re still with me after the longest tutorial intro ever (and want to join the New Year’s Eve tradition train), to make a “Best of…” New Year’s Eve book, you’ll need:
-a placemat
-high quality paper (I used 20 sheets of vellum-y stationary- delicious)
-ribbon
-a sewing machine 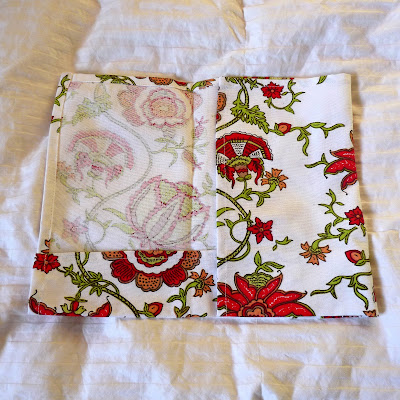 1. Iron your placemat into thirds.  Also iron the bottom up to make a little pocket across the bottom of your fabric booklet. 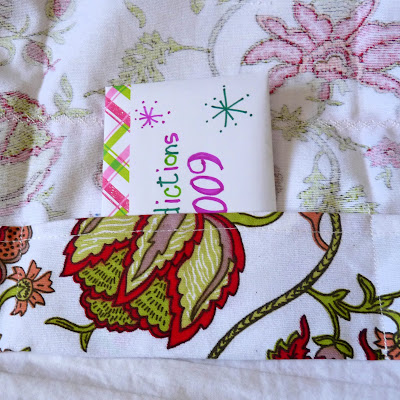 2. Sew pockets into the bottom of your booklet (we’ll be using the pockets to store our ‘predictions’). 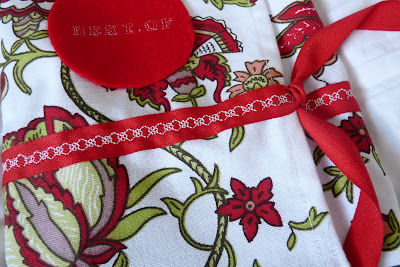 3. Sew ribbon across the middle of the placemat.  This will be a little tie closure for your booklet. 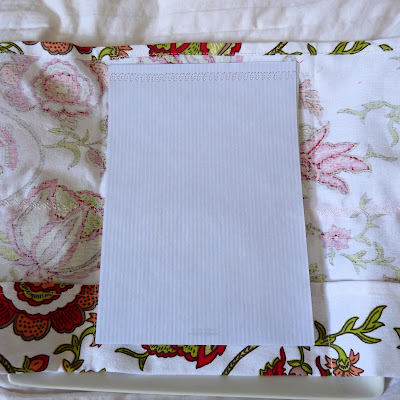 4. Line up your paper and stitch it right into the middle of the inside of your placemat/booklet. 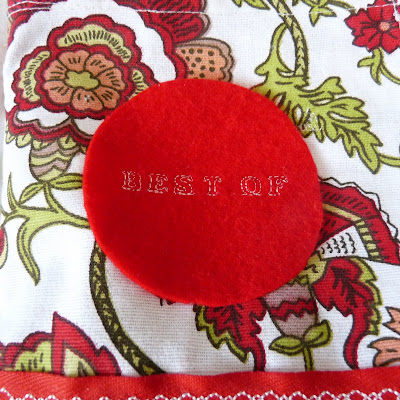 5. Add a little title of embroidered felt (if you want).

6. Fill this gem with memories and predictions every New Year’s Eve.  Fabulous!