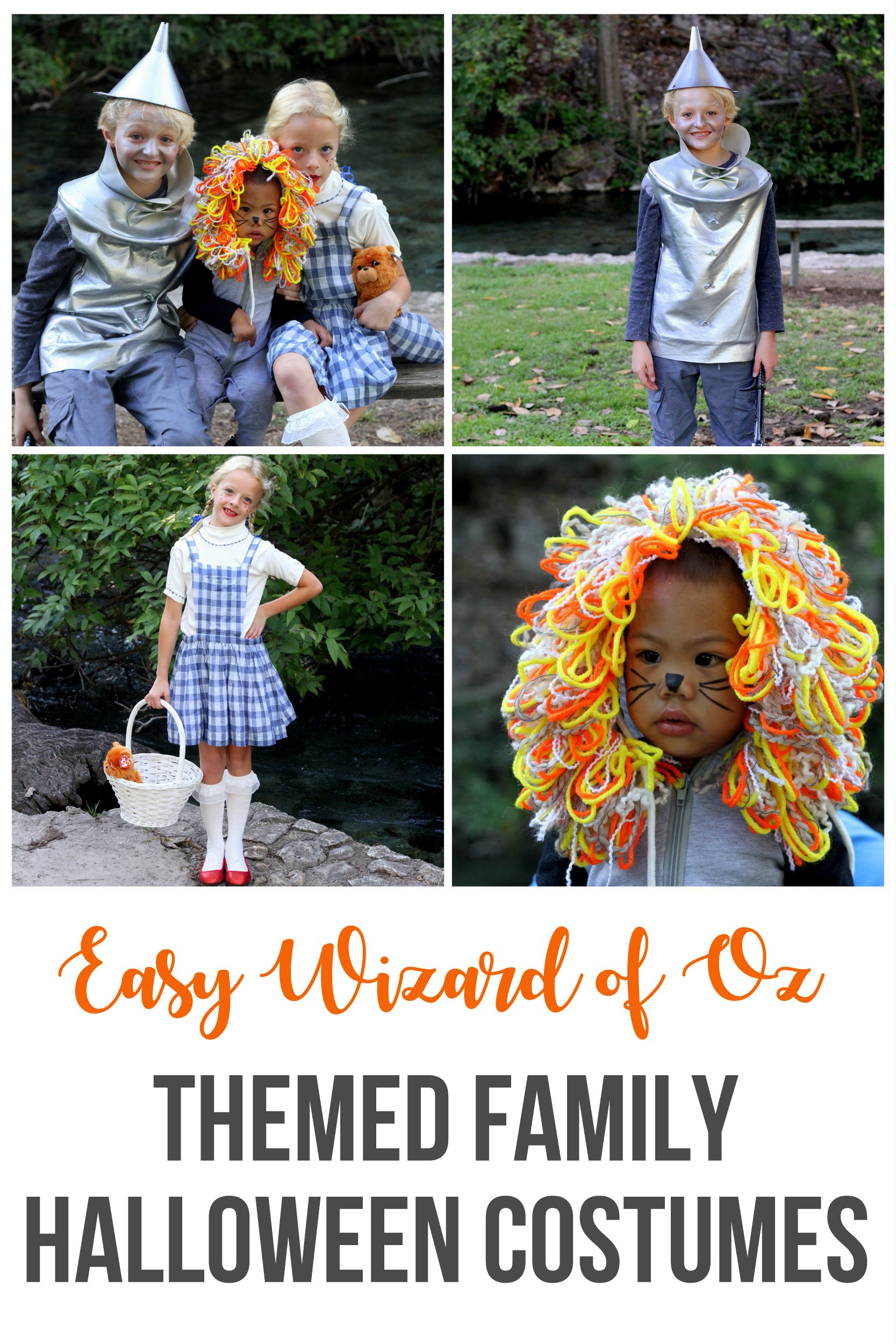 Like most great family traditions, our Family Theme Halloween Costume tradition wasn’t really something we set out to do. When Burke and Pi were little, Burke would choose his costume, and then a costume for Piper to coordinate (he was a horse and she was his cowgirl, then he was a squid and she was ‘the ocean,’ then he was a harpee eagle and she was a peacock, etc). Then, the year they were doing Star Wars themed costumes, they were going to Luke and Leia (who are brother and sister) and assumed that, of course, Adam and I would be Darth Vader and Padme (Luke and Leia’s parents). And from then on, Family Themed Costumes have been our thing. 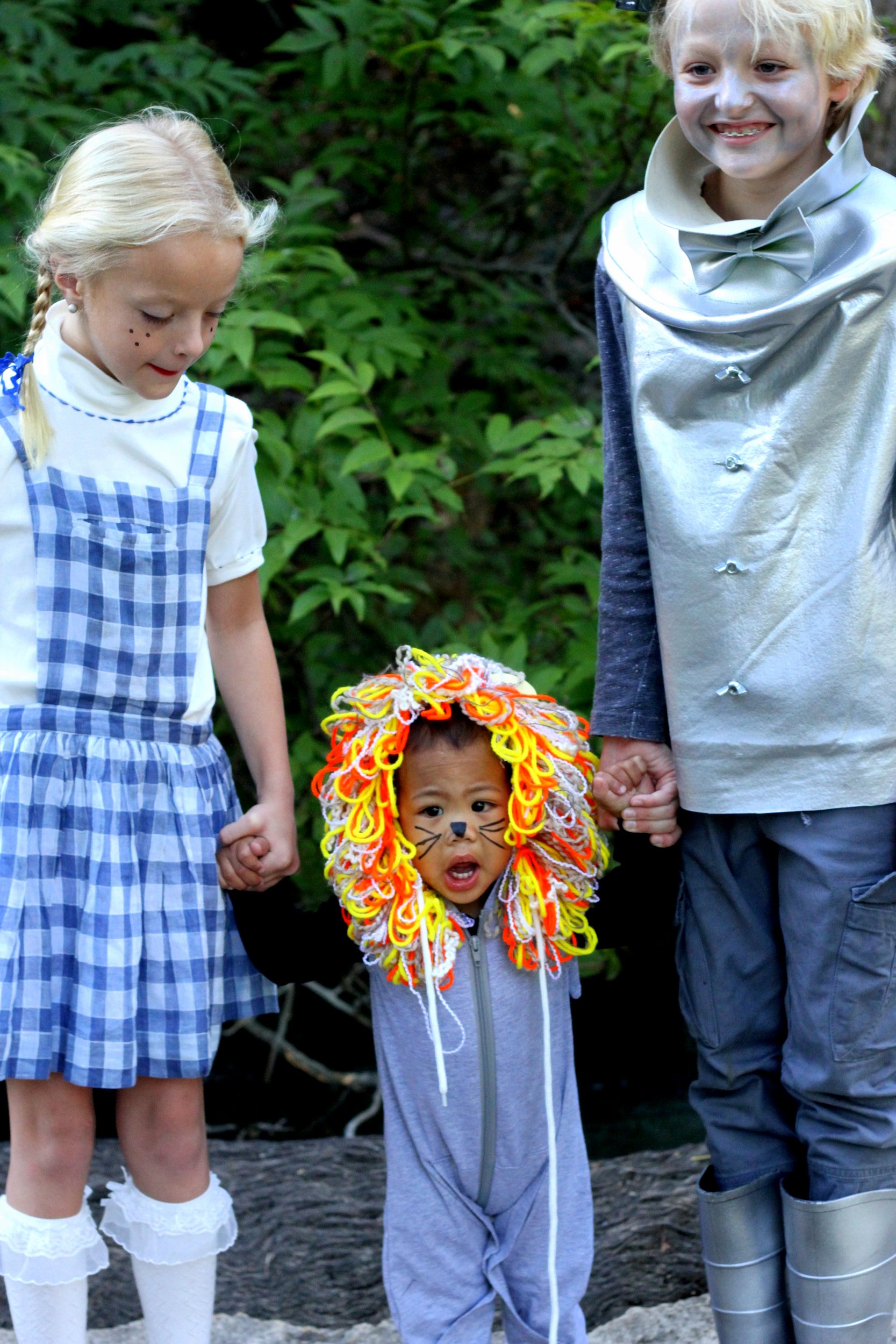 It definitely takes some planning to put our costumes together, but I have to admit, I pretty much love it! And I figured I’d start detailing pretty easy group costume guides- you know, put that planning and figuring to good use for someone else. 😉 Also, can you even handle that cutest cowardly lion in the WHOLE WORLD!?! 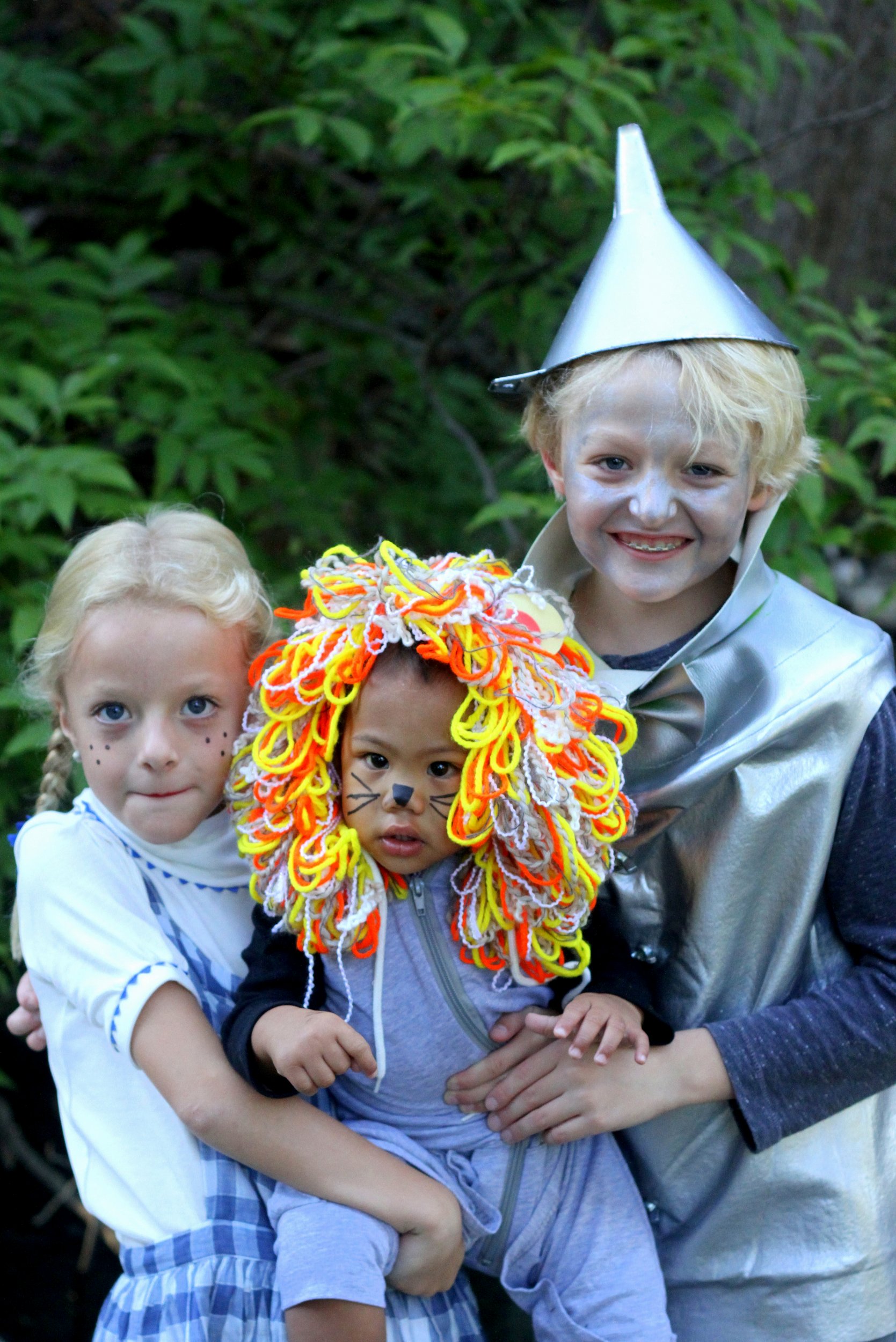 Last year, our theme of Wizard of Oz. Our costumes included Dorothy, the Cowardly Lion, the Tinman, a flying monkey, and Glenda the good witch. We also had another family join us (SO FUN) and they dressed up as the scarecrow, a lollipop kid, Todo, the wicked witch of the west, and the tornado. For real- just so fun.

A quick primer of Family Wizard of Oz costume gathering- 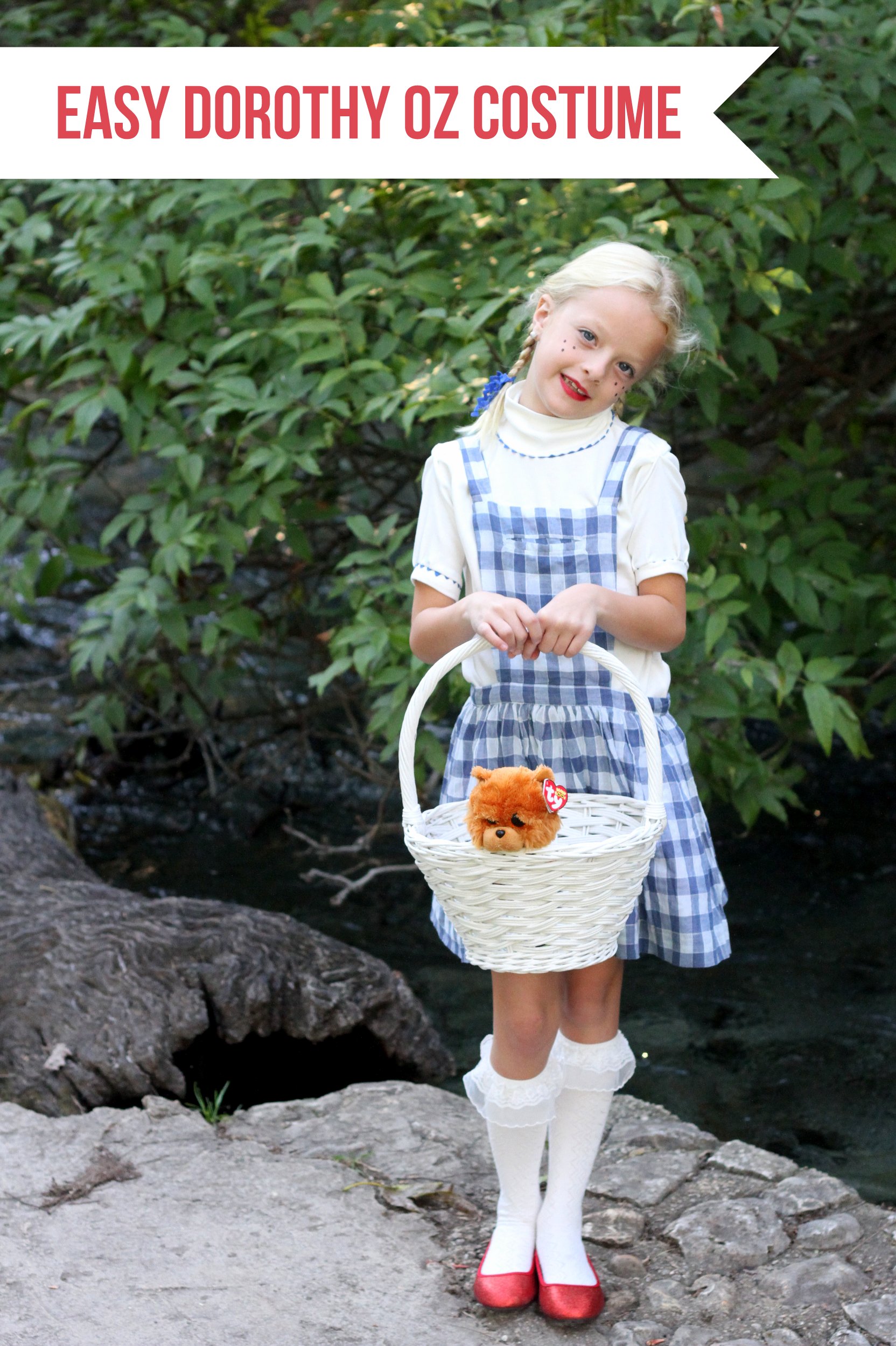 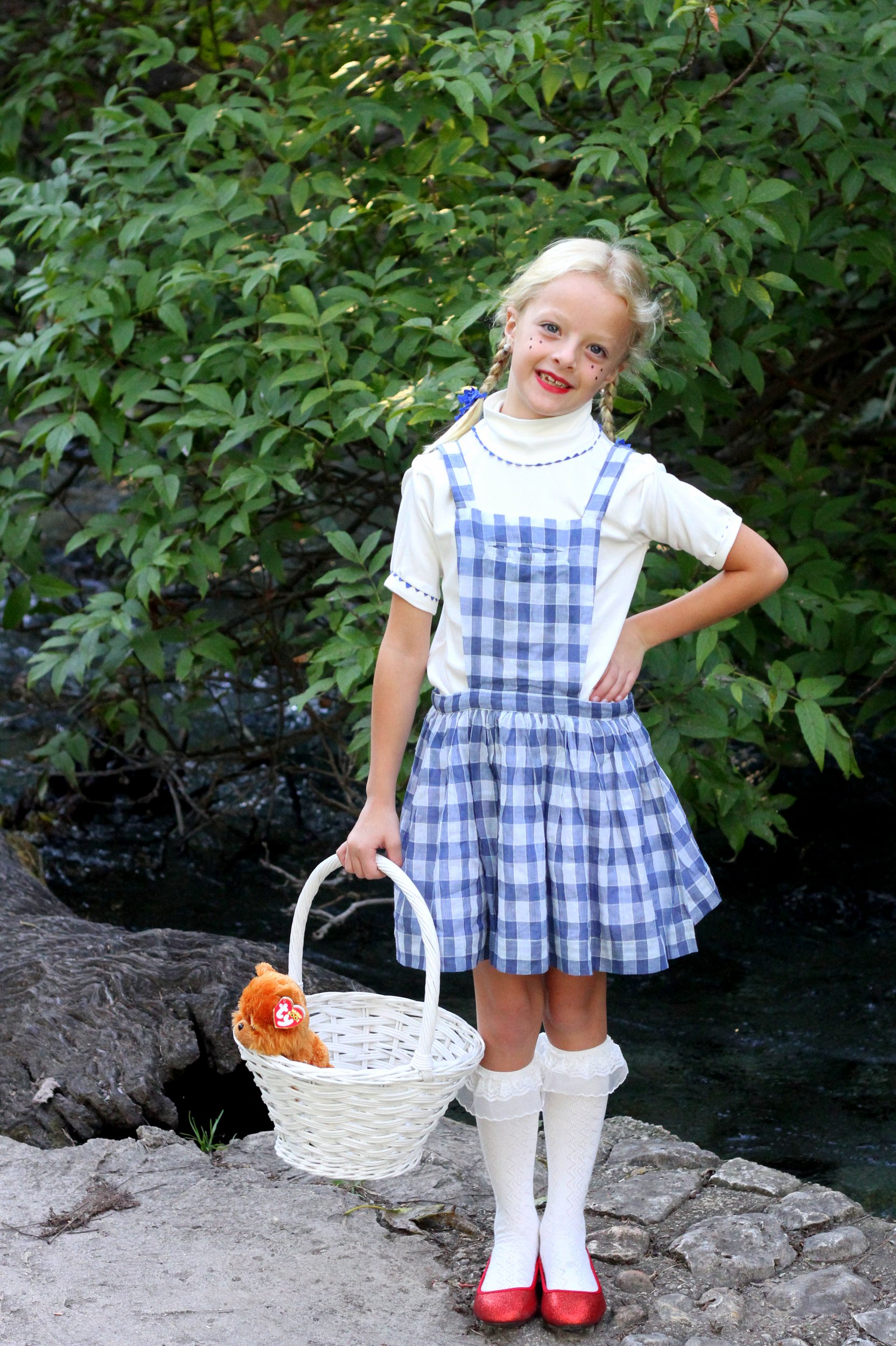 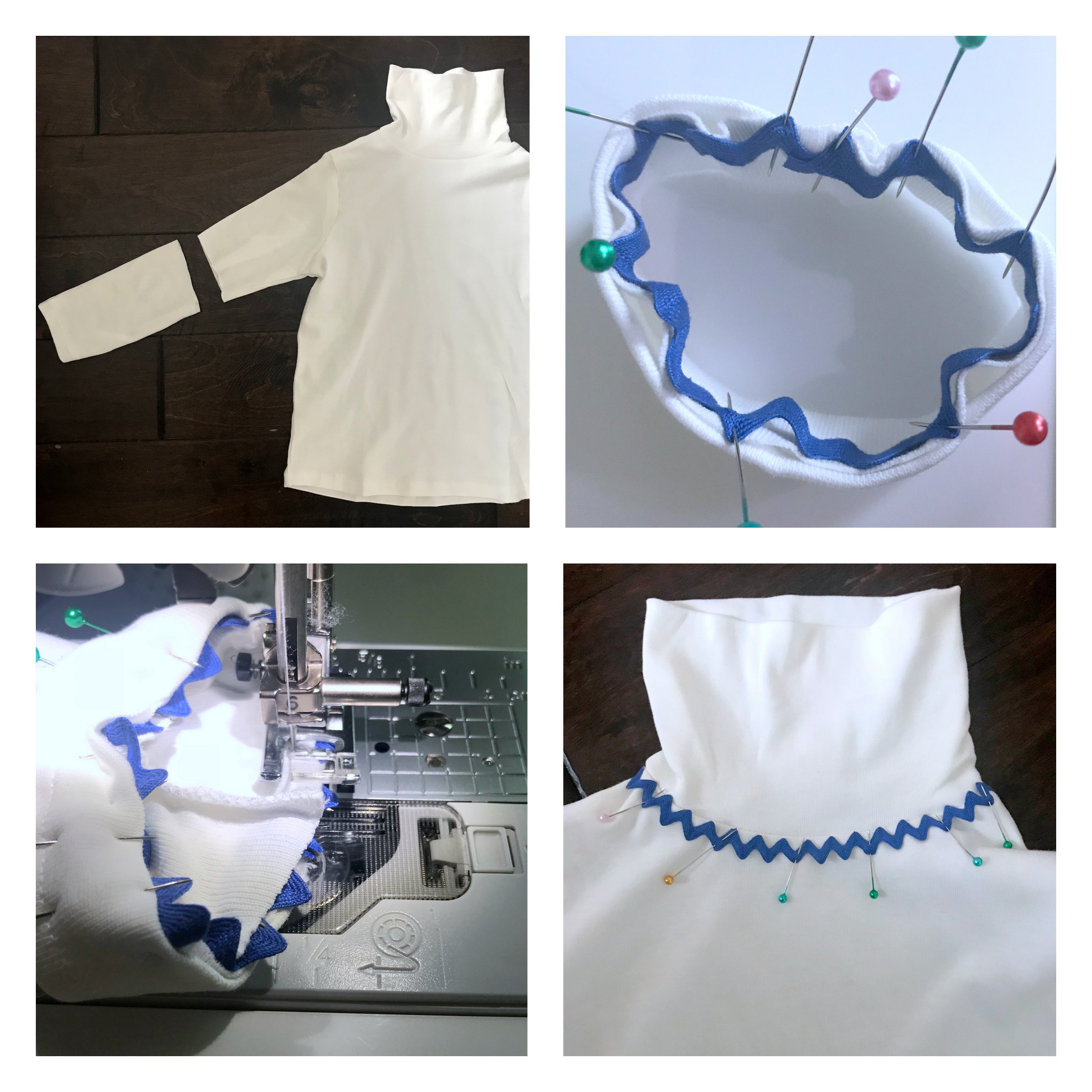 To modify a white turtleneck into a “Dorothy” shirt, clip off sleeves and use the extra to reattach a cuff. Sandwich blue ricrac in between the cuff and the sleeve to add little blue scallops. Use a few stitches to “scrunch” the center of the new sleeve (adding a little ‘puff’ to the sleeve). Add a collar of blue scallops the same way (pin blue ricrac around the front of the collar, sandwich in between, and stitch). Leave the back without ricrac to give the neck hole plenty of stretch. 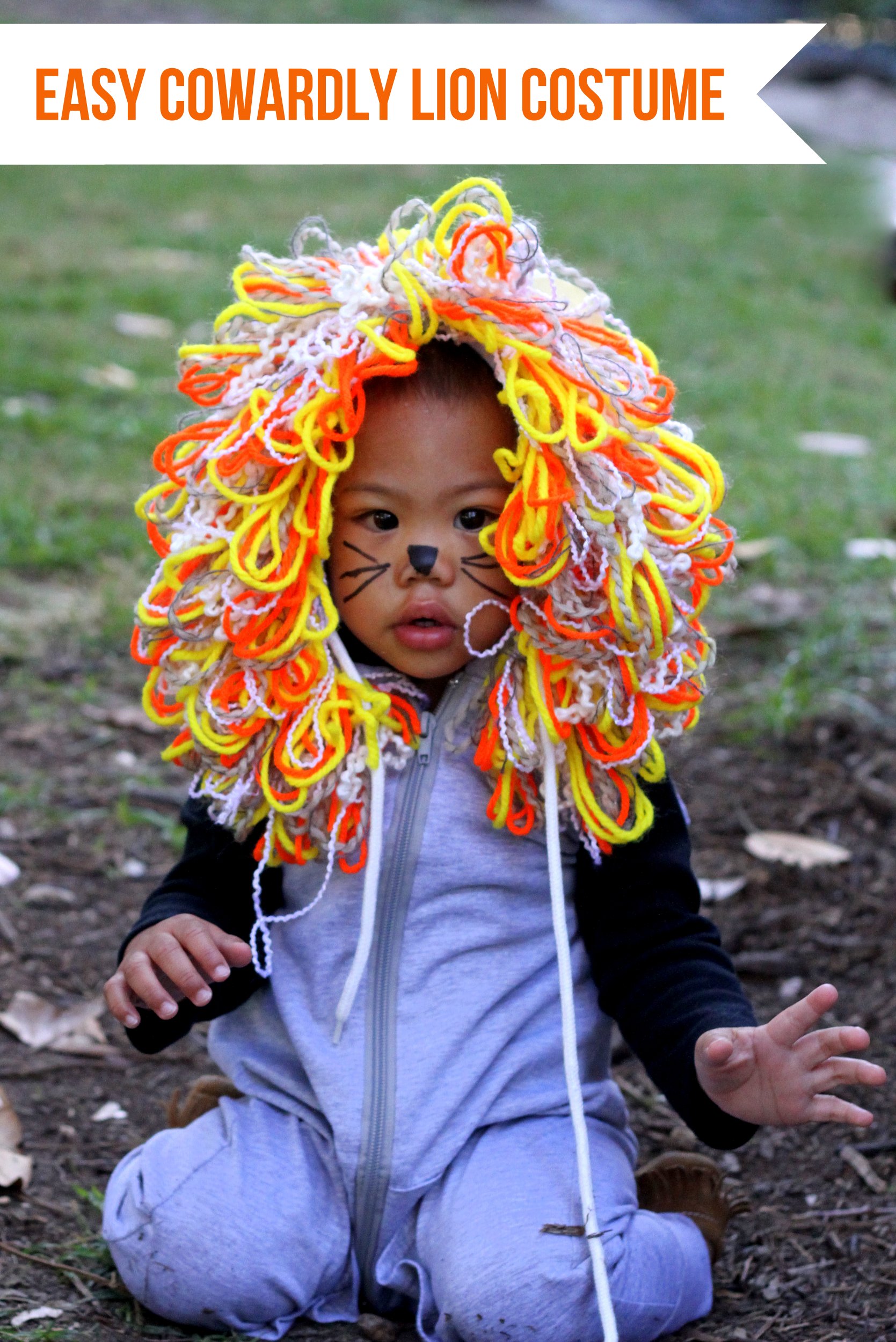 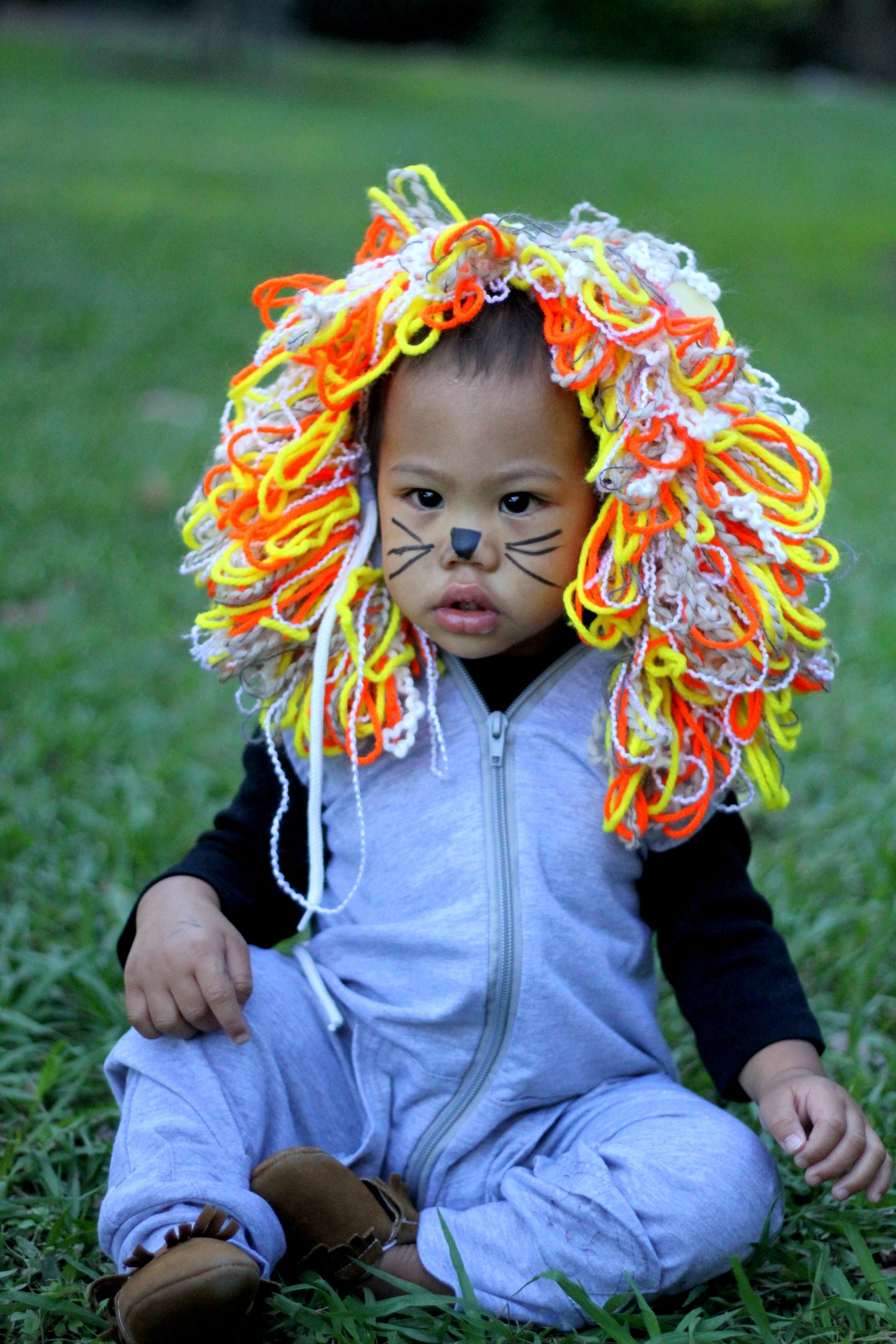 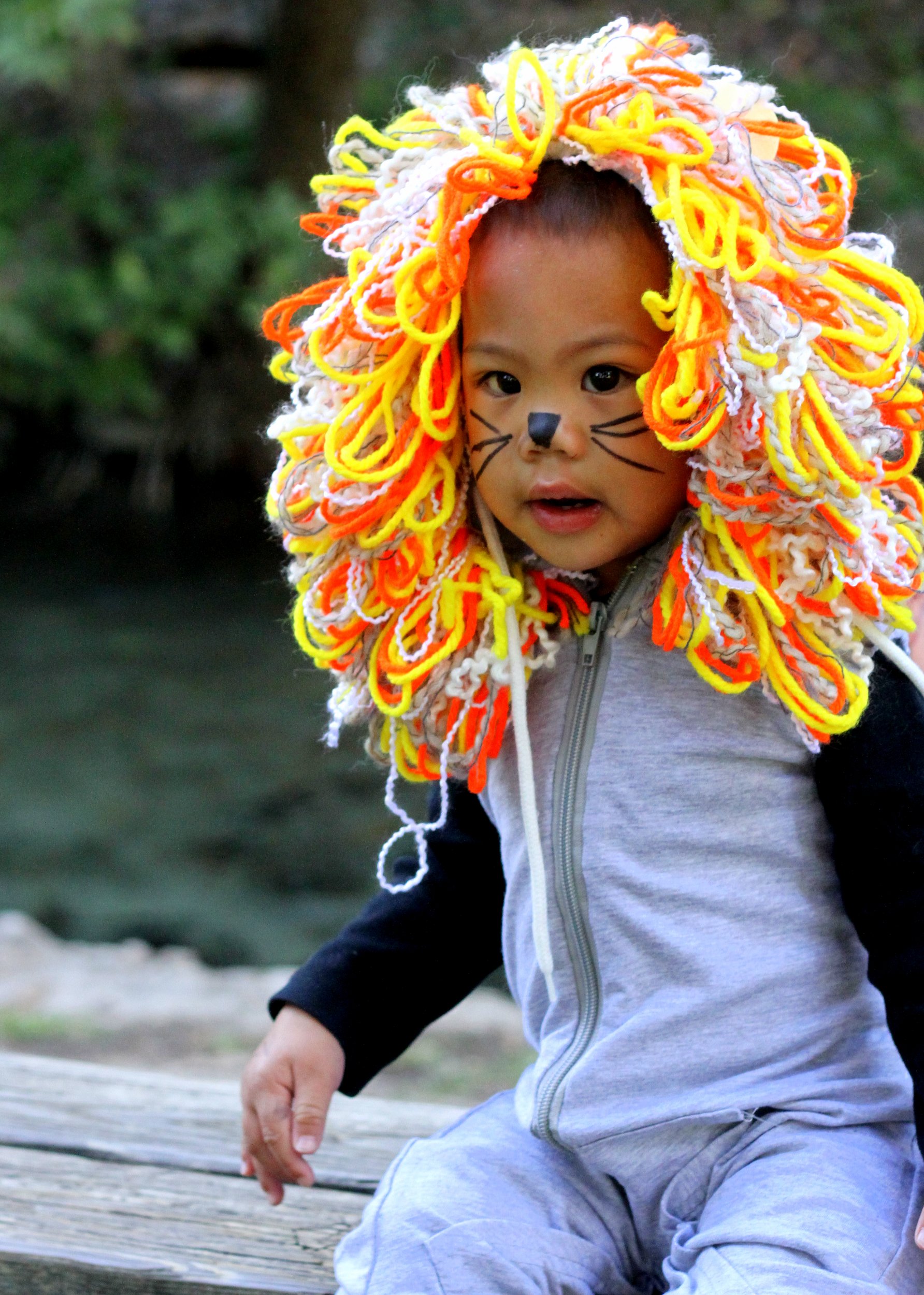 Gather a hooded romper (choose sleeve length based on your estimated Halloween weather), bias tape that matches the romper and lots of lion-mane-colored yarn. 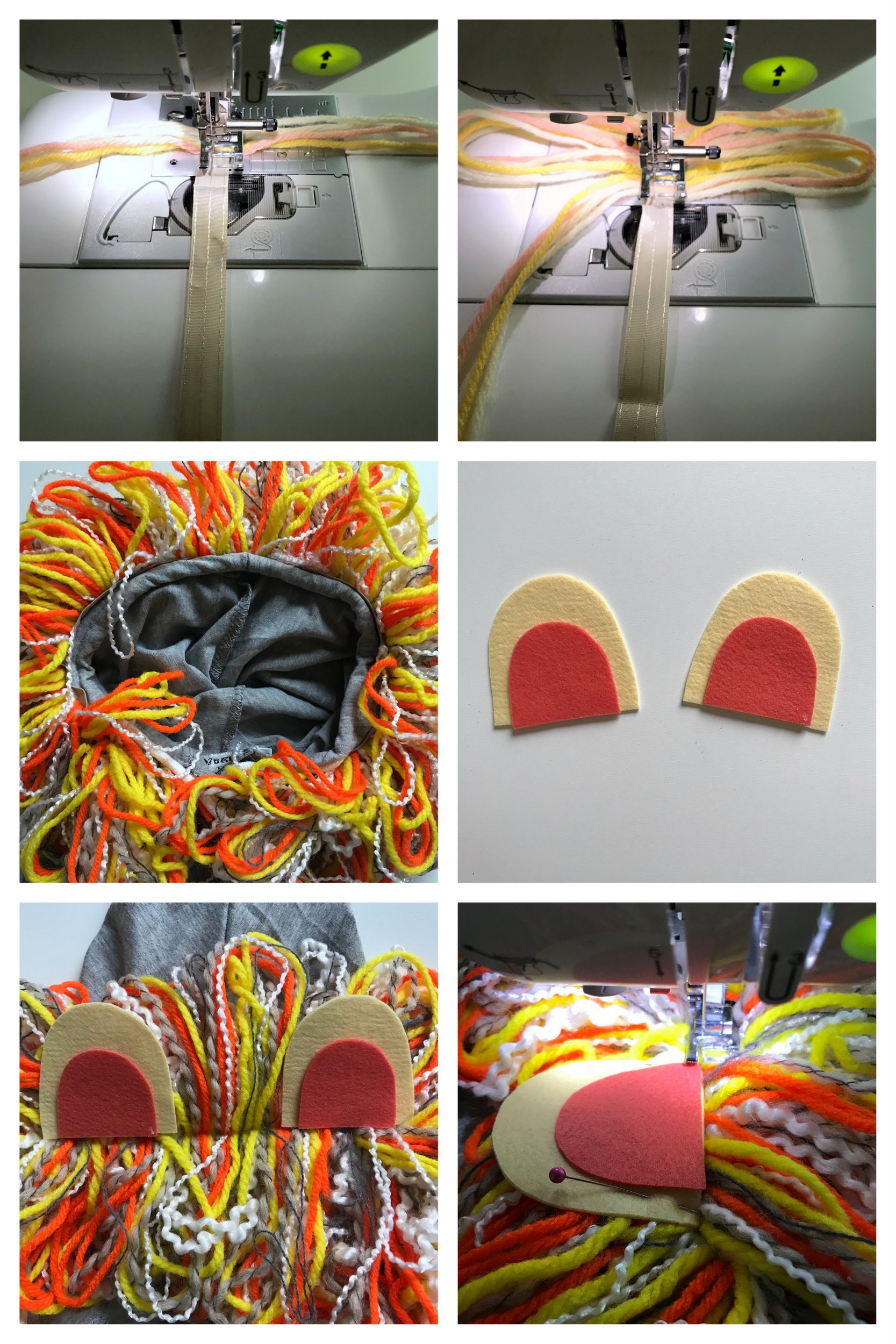 Match up coordinating bias tape along the edge of the hood to determine length of bias tape. Cut. Place bias tape, face up, on your sewing machine. Gather the ends of several different colors of yarn (I did four strands of yarn at a time). Weave the thread back and forth several time and stitch in place. Repeat and repeat and repeat until entire length of bias tape is covered. Repeat with another four strands of yarn. Sew the bias tape ‘mane’ to the outside of the hood. Cut out felt ears and stitch to the center of the ‘mane.’ 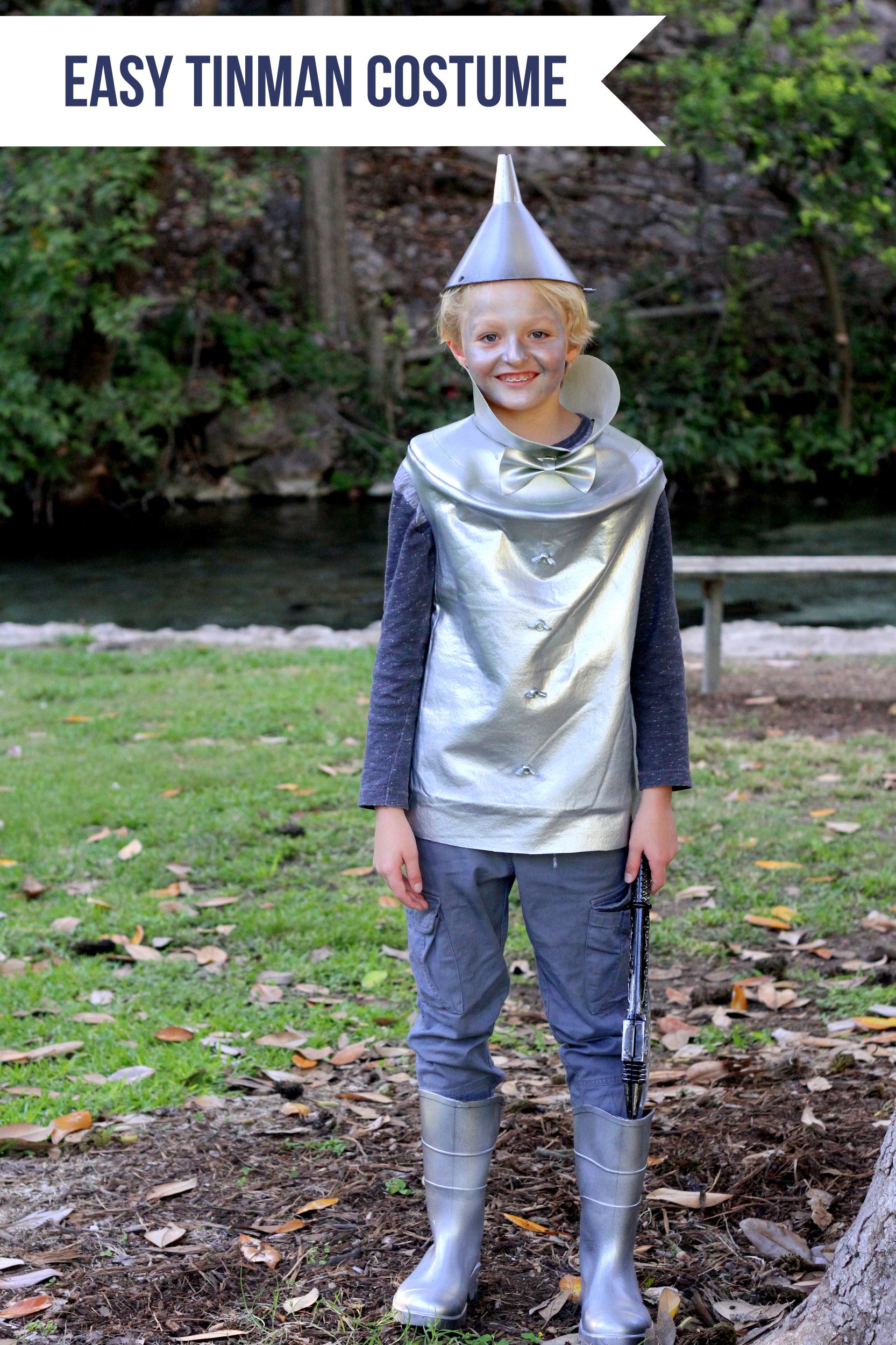 Gather a gray long sleeved t-shirt, a pair of gray pants, rain boots, a plastic axe and a plastic funnel. I used the Make It and Love It tutorial to make the tinman top (I used boning instead of tubing and stopped when it said to add sleeves [we layered a gray long sleeved shirt under instead]). I should note that Ashley’s Tinman costume is seriously so amazing, and I totally wish I went all out like that for costumes. But my MO for Halloween is cheap-ish and easy-ish, so I didn’t follow the whole thing. Add a dollar store ax, silver face paint and a silver-spray-painted trick or treat bucket.

Gather a flying monkey mask (amazon is where we got ours), a gray shirt and shorts, red, blue and white felt (plus scraps of gray and brown felt for feathers) and a t-shirt that fits your costume recipient. 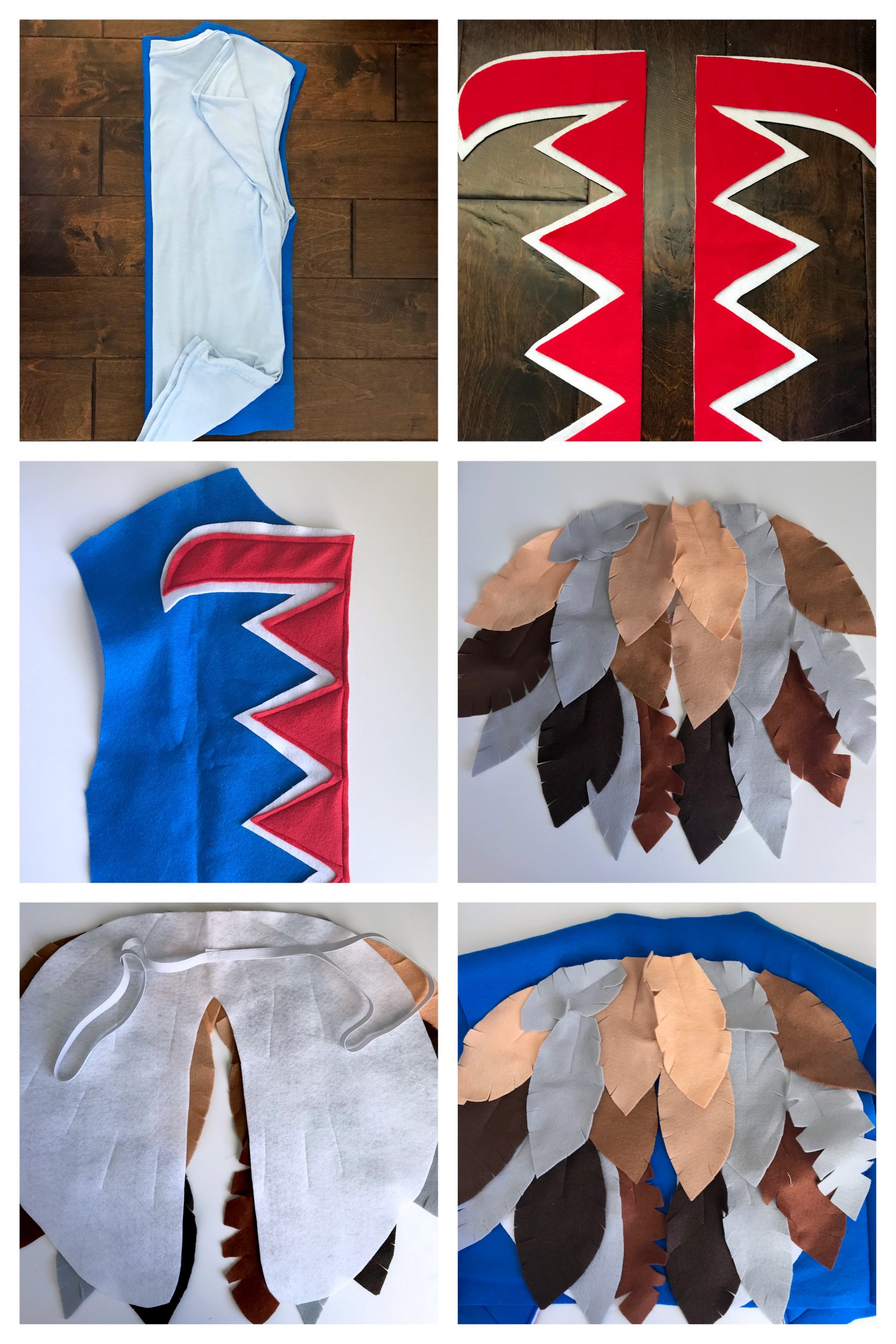 Lay out the t-shirt (folded in half) as a template for your vest. Cut around the t-shirt in blue felt, leaving a slight perimeter for seam allowance (I doubled my layer and cut out the front and back of the vest at the same time). Cut the vest front in half up the middle. Freehand cut a red felt design (I just pulled up a picture of the flying monkeys on the Wizard of Oz and followed that same idea- a few triangles with a longer swirl at the top). Cut out white felt slightly larger than the red. Pin the red and white designs onto the blue vest front and sew in place. Sew the front of the best to the back of the vest at the shoulder and along the sides. Make wings for the back and attach to the vest (freehand a wing shape and cover with shades of brown and gray felt feathers). Make a felt monkey tail (again, I just freehand cut two layers of a loopy tail)- sew together and turn rightsize in. Done. 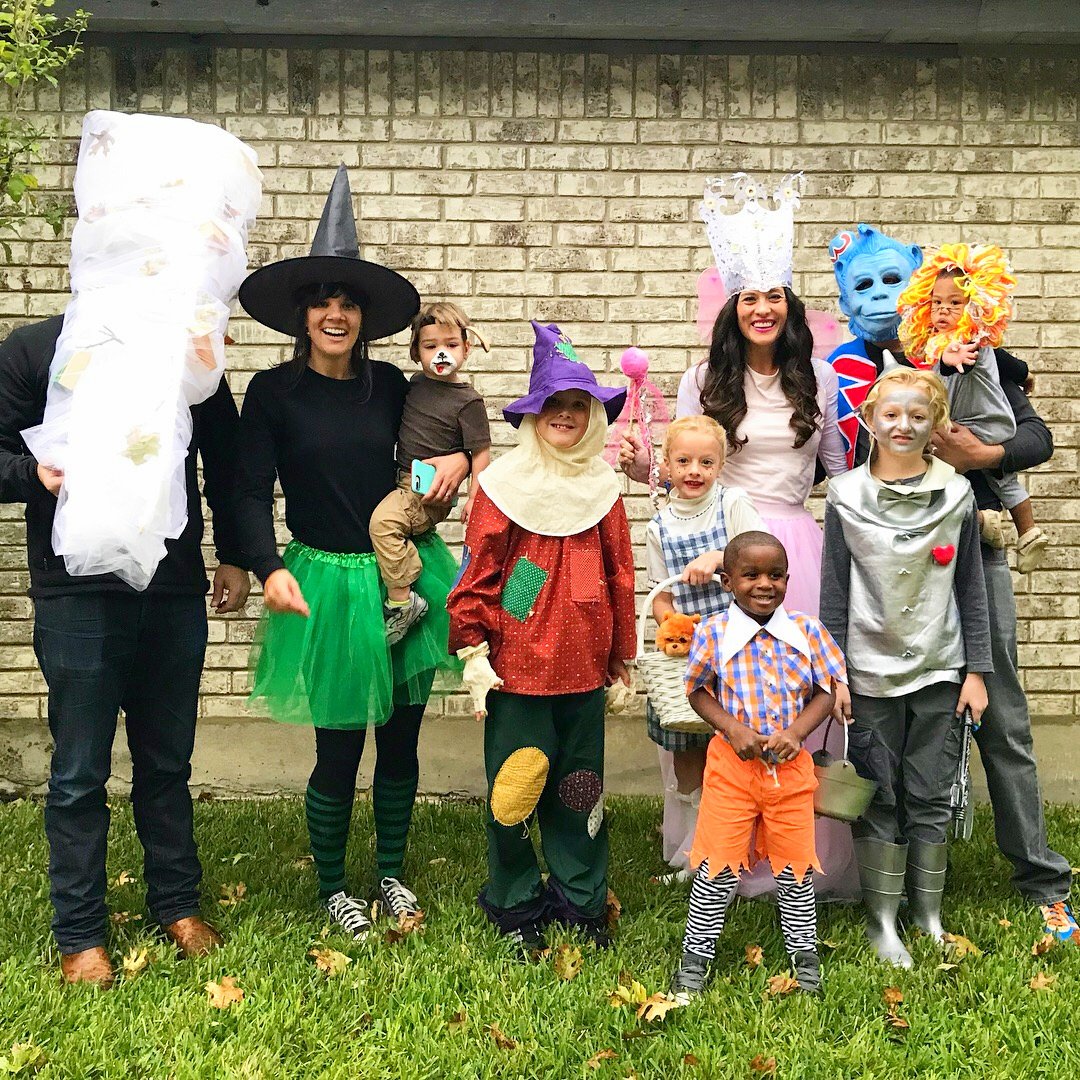 I didn’t take any group pictures with my actual camera on Halloween, but the whole group lineup is too good not to share (even if it’s a phone pic!).