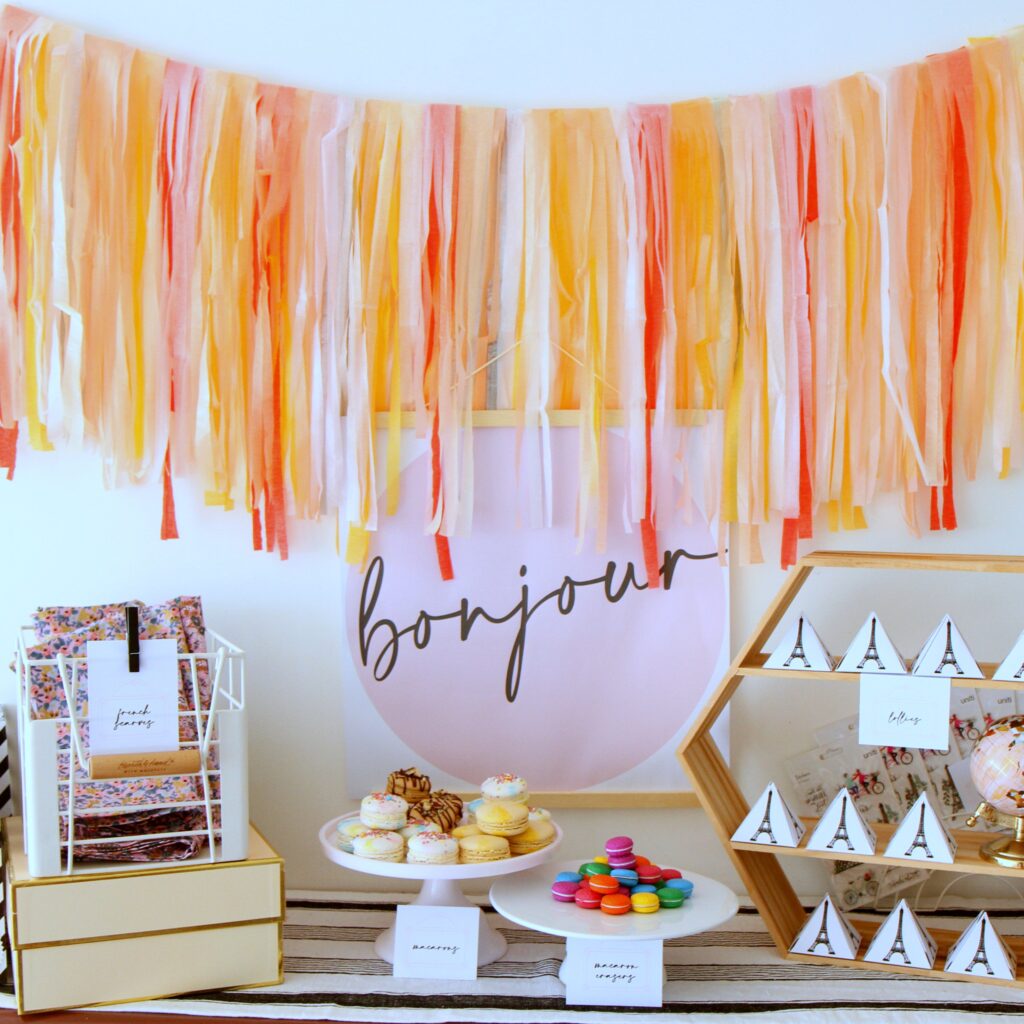 It’s no secret that Pi has loved Paris since she was teeny (remember her Madeline themed birthday party when she turned three? And the accompanying macaron and lolly station?). So it’s only fitting that, as she enters the land of double digits, she’d have a Paris themed birthday party filled with berets, macarons, mini eiffel towers and so much other Paris-y goodness.

The birthday girl herself was actually a huge part of the planning and party prep for this Paris fete! Her vision was a ‘tour of Paris,’ starting with a ‘plane ride’ (the invites were plane tickets) and then making stops at ‘Angelina’ for hot cocoa (one of her actual Paris faves), a ‘Parisian cafe’ for lunch, ‘the louvre’ for a little culture, a ‘french market’ for macarons and Paris souvenirs and then a ‘Parisian flower stand’ to round things out.

I love her creativity! I also love that pretty much my party planning was arranged around the ‘Paris tour stops’ (and, I’ll be honest, I love how much she helped with every part of this party! Big kids are so fun!).

Piper was entirely in charge of making the airplane (she even drew airplane windows with Paris landmarks and sorted plane snacks on a trolley. I love her!). She also recruited her brother and a couple of his friends to be the cocoa and cafe servers and also the Louvre scavenger hunt guides. (Note- parties get easier once you have kids that are able to take over entire sections themselves).

I forgot to take pictures of the plane ride, but the first stop at Angelina for cocoa was fantastic (and also not so true to the thick, creamy, no-cocoa-topping-ed REAL Angelina). So much whipped cream and so many marshmallows and and so many sprinkles were consumed y’all. SO MANY.

The Parisian cafe lunch was heavy on the french treats like pain au chocolat, macarons, crepes, croissants, tarte au citron (as well as a few NZ staples like sausage rolls).

For their stop of ‘the Louvre,’ Burke made a scavenger hunt for the girls by hiding pictures of Louvre masterpieces all over the yard. Their reward for hunting down the works of art was a little souvenir/favor shopping at the “Marche de Piper.”

The favors for this party were so fun to put together (even though all of the Paris favors I originally ordered are still stuck in a package somewhere in the US). We gathered macarons, berets (lucky find!), macaron erasers, and Paris stickers from local shops (and a bakery).

Jord had the brilliant idea of cute french scarves, so I sewed one for each guest with some sweet floral Rifle Paper Co. fabric.

And since the Eiffel Tower boxes I ordered didn’t arrive, I created my own and we filled them with lollies. I shared the free printable for those boxes here!

The girls also had a chance to make ‘les bouquets’ at the flower stand (Pi and I started working on the paper flowers during her term holiday and we made a couple a night until we had a nice pile for her guests).

The french flower market was for sure a fan favorite- I shared way more pictures, and tips for our paper flower assembly, here.

The best part of the day was that my favorite girl had SUCH a great time sharing her favorite city and some of her favorite treats with her friends. What is better than that?

Bouquet Bar for a Paris Party